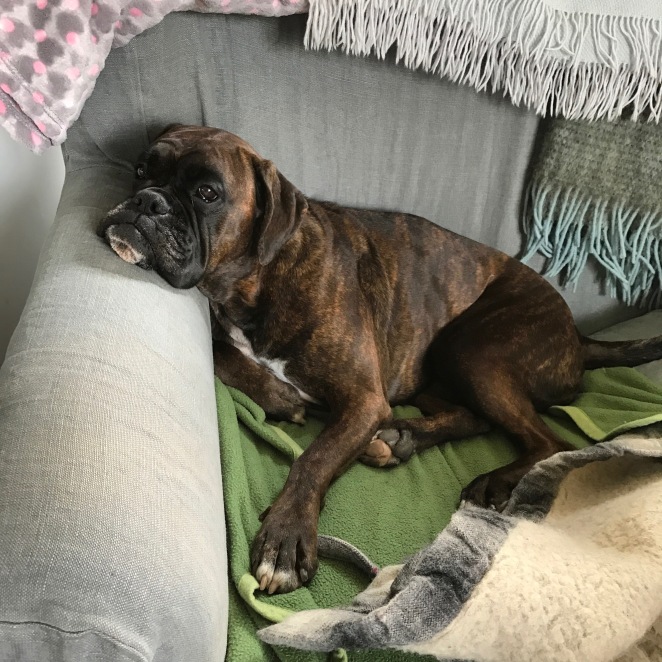 Last Sunday morning, as I was quietly meditating on my chair Veronica burst in, greatly disturbing my aura; “Felicia, c’mon, we’re going to a race”!

What?? Hello there; it’s SUNDAY and I am MEDITATING!

Veronica forced me up, “Felicia, NC and MBC are running and Indya’s coming, it’ll be fun”. Oh, in that case…I HAVE to come. (If not she’ll just brag about the cool stuff she did.)

Turns out we were tricked! A race is THE most boring thing ever! Nothing cool here!  You’d think we’d be able to run, to jump and actually have fun. But no! BORING! 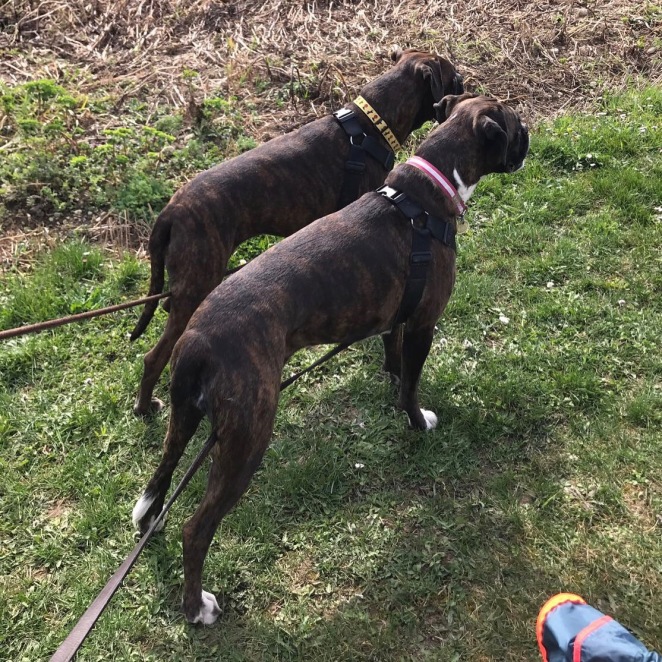 We started off acting like two well behaved Boxer girls. Looking at the crowd, expectantly waiting for the fun to start.

It got old and we decided “observing” passing dogs would be entertaining, in a very civilised way I may add, well, “Boxer style”.

“Boxer style” was no hit. We were “too agitated” so they split us up.

Indya, with MC, started her “morning routine”. Yes, she has to stay in shape.

Me, snuggling and playing with Dennis

That’s when things got really bad. I frankly don’t understand what we did wrong…

…because they suddenly tied us up to the gate!! Yes: THE GATE!!! And WITHOUT blankets. Very unfair!

Were we expected to lie down on the cold stone?? Never in a million years!

Racing seems to be a family thing.  I think it’s because of VH, he’s a real pro and does all the very difficult stuff like running up and down mountains.

Now they all do it, well not the mountain thing. I think Indya’s secret dream is to race with him.  VH:  PLEASE DON’T! (I’d NEVER hear the end of that story!!)

Are they having fun?

And of course Veronica is always there cheering! Watching with tears in her eyes. I don’t understand why? What’s her problem?

It was MBC and NC’s first race.

There she was, looking very concentrated and focused. Everybody started cheering and screaming. Obviously we joined in.

You’d think Veronica would be happy that we participated…but NO. She got irritated and lectured us about “Proper race behaviour and attitude”! So they can jump and cheer and we have to be “quiet and calm”. No logic here!!

On the plus side as soon as we were “quiet and calm” Veronica threw treats at us to search for. That kept us busy for quite a while.

And there he was, my NC, running and smiling!!  VH was running with him as a coach. There went the cheering and the screaming,

Despite the “Race dog rules”, we joined the enthusiastic fans with happy barks. NC loves me and always plays with me, wish I could run with him… for a while…a few meters or so. (Remember, I’m more of a sprinter)

There is quite a lot of competing in the family.

Veronica’s niece, PS is a horse addict. Here with her Contez. They won plenty of medals and ribbons. Veronica’s a fan, she even went to a few shows. She would stand next to the course with tearful eyes. (She really has a problem!)

I have to say they look very elegant and classy, PS and Contez.

I’m no big Horse fan, not that I’m scared. I just prefer to keep a certain distance, and anyway there is no other option. I have to follow Veronica’s “Horse rule” (Sit down at wait for the horse to pass) 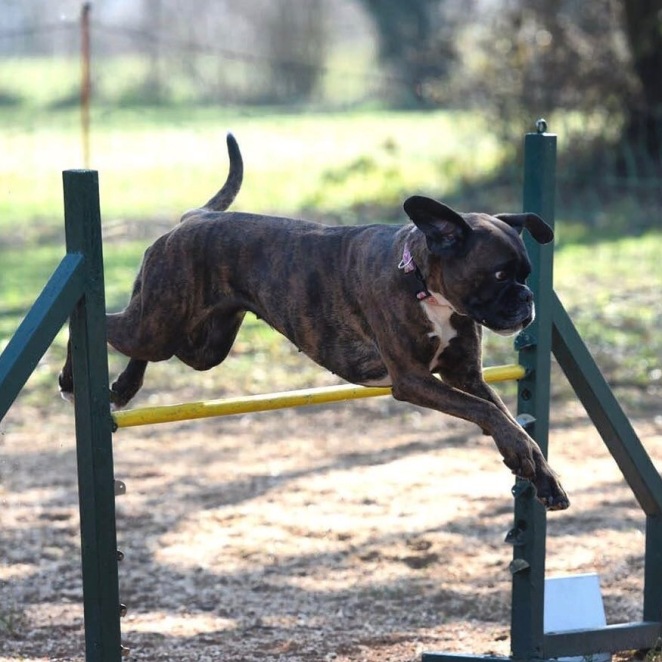 Then we have Veronica’s friend VT, she is an Agility champ with her Boxer Gilda. They both love it! 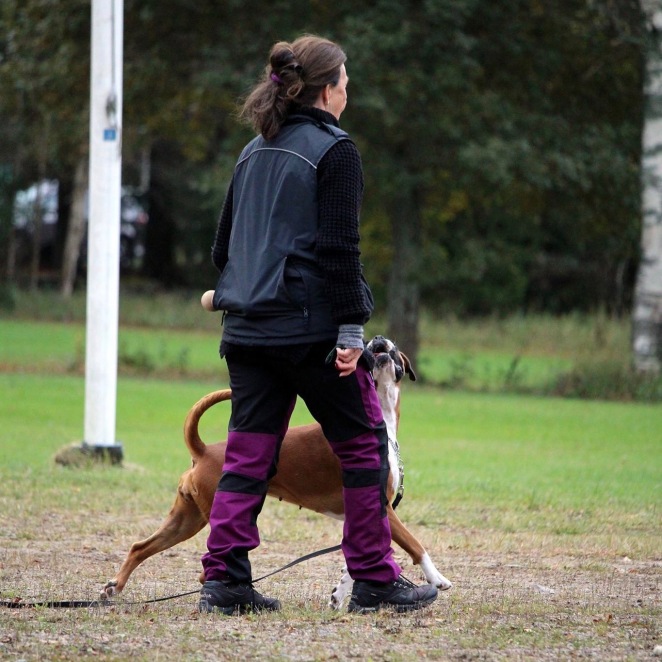 YH, who owns three Boxers competes with THEM ALL!! 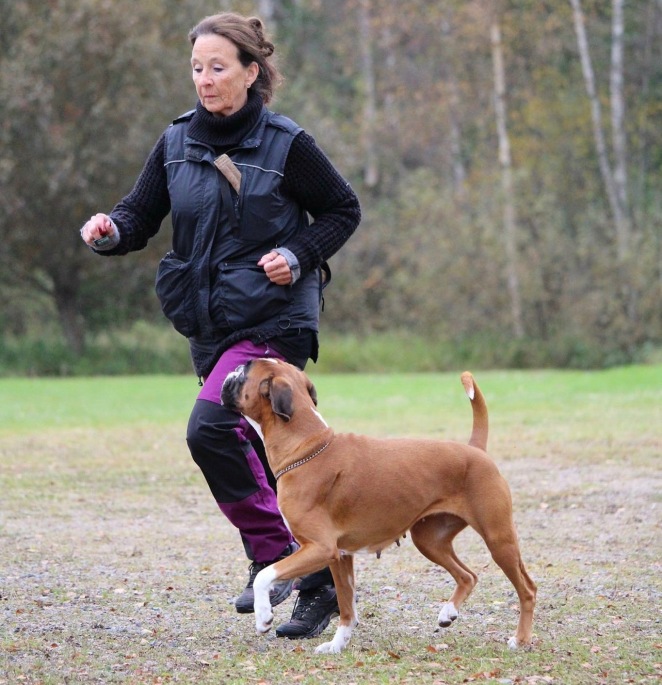 Just look at them! They’re so concentrated and perfect. (I might be a little, only a little jealous here.)

I think Swedish Boxers are different! That’s why!! Surely they have Obedience genes. Me, my Father is Italian. It’s a well known fact that Italians are warm blooded!

I’m not that interested in any kind of competition (I’m like EC, he’s laid back and more of a geek). I mean what’s the point? You have to work and work and train and train and all that focus! For a whole trial!! No, not for me!

I have a theory, I think Veronica secretly never liked it that much!!

“Felicia is way too distracted, she has real trouble focusing”! Yeah, yeah blame it on the sweet innocent Boxer girl…

See what a mean, lame excuse! I could compete if I wanted too, I just don’t feel like it!

Question: Do people actually like competitions?  Do they enjoy it?  To me, there seems to be an awful lot of pressure.

Before the D date everyone’s nervous and tense. After the competition they stress!! Beats me, you’d think they’d be relieved its over.

“I’m not very satisfied with the result, I could have done better”…”What was your result?”…”What did he do?”…”What did the number one get?” …and so on…

I guess for some mysterious reason, people love it! And the whole “result circus” is part of the deal. Apparently the aim is to run faster, jump better, get higher points…I, personally, don’t think results are important.

Veronica did enter me into the Big Swiss Boxer show. Andy was my handler and I won first prize in my category!! The judge said I was very beautiful, well of course! I have a great talent: to pose!

Andy and Jacky were very proud.

I loved my distinctions! They made me feel good and happy! I know what you’re thinking; I might be contradicting myself by enjoying my achievements but this is totally different, apples and oranges!!

The day ended quite well. All athletes went home, happy, Veronica and MC felt we needed a reward (we certainly did). They took us to the lake for a swim. We had so much fun, and what’s more;