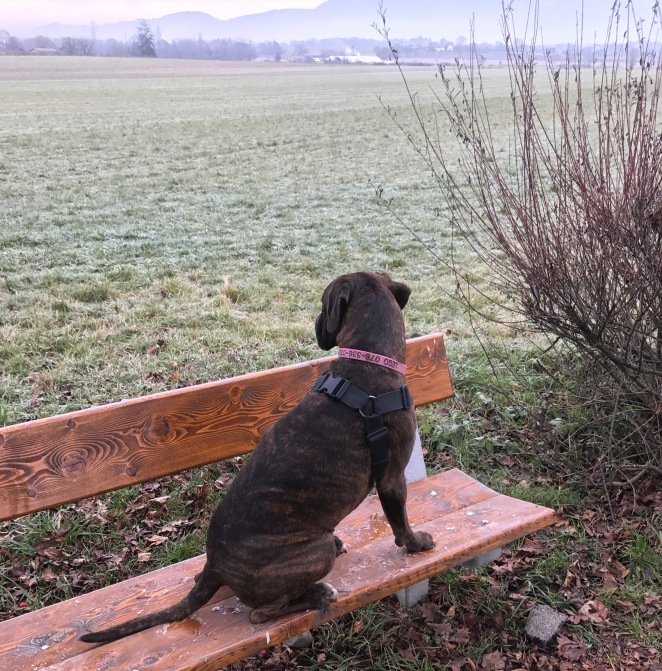 What’s fun in January? NOTHING!

Corinne has a month off so NO AGILITY! I even wish I had “Thursday big dog class”…and that’s saying something if I actually miss that group…!!

Even the ground is boring, it’s frozen and hardly no interesting smells. Mind you this pleases Veronica since I’m a little more focused.

I can let her think the “smelling/digging” phase is over. As she keeps on telling everyone. I’m planning to get back on track ASAP.

The month did not start off that well;

You see, every year Veronica sends off Christmas cards. You heard about the tense “family photo shoot”.

Then we have the “what picture should we use” discussion. That’s just as complicated. Every family member needs to give their opinion.

“NO!! Not that one I look horrible”… “Not that one either” etc.. finally, after hours of negotiation, text messages and phone calls : The Family Chrtistmas Photo is ready.

I had totally “forgotten” about that. Last year, I got a little fed up with the whole card business. I figured no address book; no cards!

This must have slipped Veronica’s mind as she found it in the drawer. She got very annoyed, to say the least. “Dennis, do you know what Felicia has done??!!”

Is she telling on me?

I don’t think he cared. He’s not much of a card sender kind of guy. (He might even secretly agree with me)

Anyway I don’t see her problem, the addresses could easily be read…well nearly all. 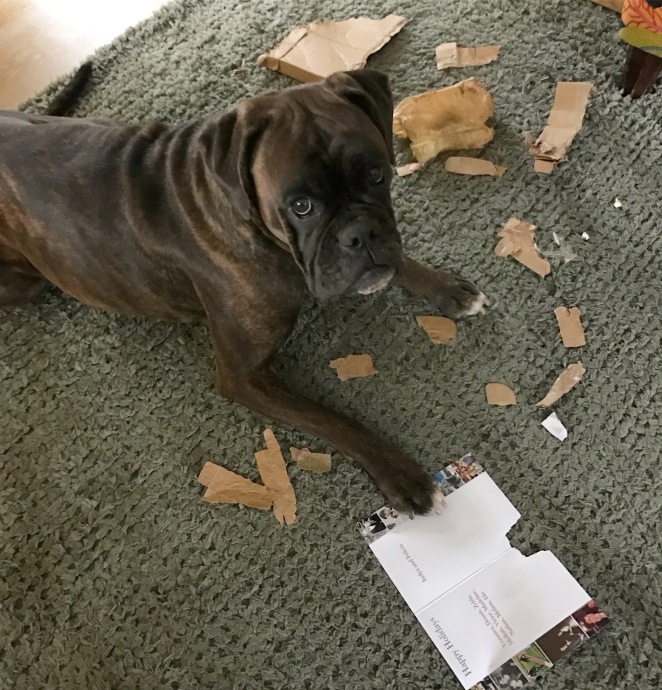 Shortly after, I was quietly having fun with a cardboard box. Don’t ask me how, but suddenly there was a card there. Perhaps Veronica even gave it to me.

“Felicia is that our Christmas card?”  Duh…yes!  As it happens only friends and family get one! Not the dogs!

After the “Intense card writing”session it was time for “Obsessive cleaning” time. Veronica loves to clean, organise, declutter… Yes you heard me!! She does! (I know, isn’t that crazy?)

The family all thinks she’s a little neurotic in that way. She organizes the shoes in the entrance, the clothes in her walk-in closet…by colour and genre, the Kitchen (she does not even cook)  etc etc

I felt my help would be superfluous! I got the impression keeping a safe distance was the wiser choice.

The huge Christmas tree was thrown out in the garden. I tried to drag it around for a while, unfortunately it was a bit too heavy. Even for my big muscles! Very disappointing.

As if this whole January misery wasn’t enough, she made me wear a COAT!! Yes!!! “Felicia it’s very cold. You can wear this coat”

Coat? She’s got to be kidding!

Barbour who??? Don’t care!! This Barbour guy can stick to making coats for people and leave us dogs out of it!!

MC gave it to me. What was she thinking? Never seen Indya wear her’s.

Ok, I know some dogs, Lilya for one, needs a coat in the winter. And perhaps in Sweden. But me??? NO!! Veronica only wants me to wear it because it’s a famous designer!! Pathetic!

I was feeling rather gloomy and felt entitled to a little treat…I went sleeping on the bedroom chair.

Now here comes the BIG surprise! Veronica didn’t react!!! Did she feel sorry for me?  Dennis even said “Put up a blanket for her”!!! 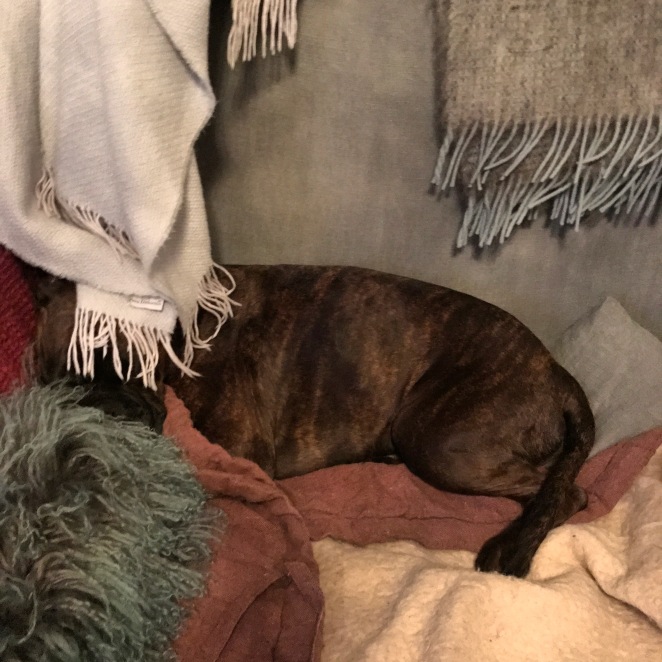 You’ll all be happy to know: I’m officially allowed up on the chair, as long as my blanket is there! Wow, I never thouhgt this day would come.

Boxer Felicia’s allowed to sleep on the chair!!

Bending a “Veronica rule”…THIS MUST SURELY BE A FIRST!!!

From there on things got better and…

All three of us watched “Downton Abbey”. I love that show, it’s romantic and that little Labrador, Isis, is really cute.

Veronica went on and on about how she would love to live in just such a Castle. What? A Castle? Isn’t that a little presumptuous.

Let’s just take a minute here to reconsider. Me a Castle dog.

Looking at it from that perspective. Hmmm…I need to think just a little…Yes! I could do that. Live in a castle. “Felicia, the castle dog is touring her land”. How cool would that be!!!

“Lady Veronica with her Boxer, Felicia von der Andreashöhe” I can totally see myself.

A few days later even a better surprise: MC and Indya came on a walk with us. I was so happy. We ran off in high speed! 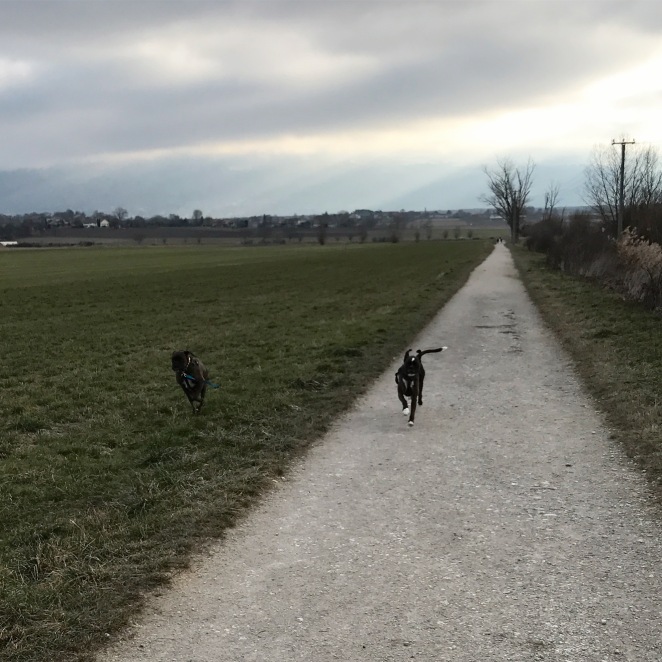 And back in even faster speed. Indya leading the way…of course.

I simply can’t get over it: how come Indya has so much energy? I really don’t understand. I think it’s all VH’s doing. He runs with her all the time.

I tried to distract her, as usual she ignored me. 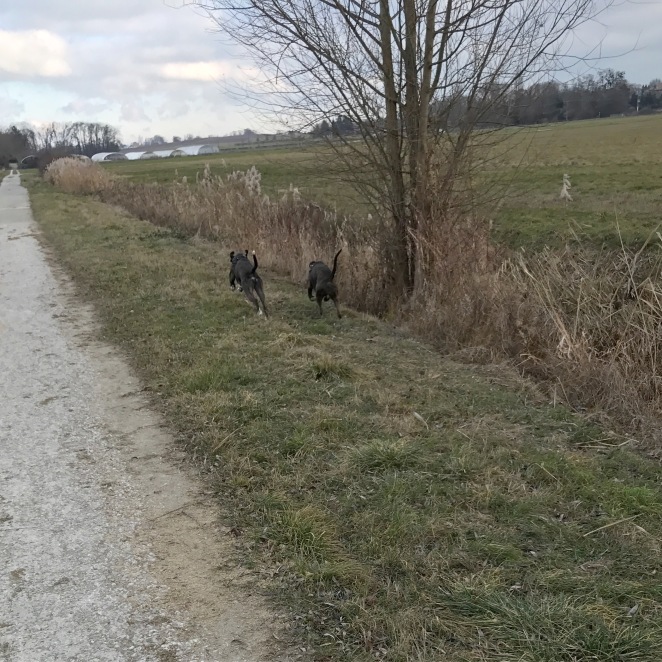 Off she ran, again. I had no choice but to follow. I don’t want to see her smug “I’m so fast” look.

Would it kill her to show a little consideration for her short legged BFF?  Run a bit less? Anyway, what do I care: I have big muscles! Even Dr L says so!

I admit I was quite relieved when the walk ended. Don’t get me wrong, we had so much fun, but all this running… is it really necessary?

I’m not complaining but…I think…oh, is that Turkey in her hand?

Back home I went into “recuperating” mode.

Should I start running more, perhaps I need to get into better shape. Long distance, endurance that is. I’ll think about it tomorrow…I’m too busy sleeping!

One thought on “January Blues”