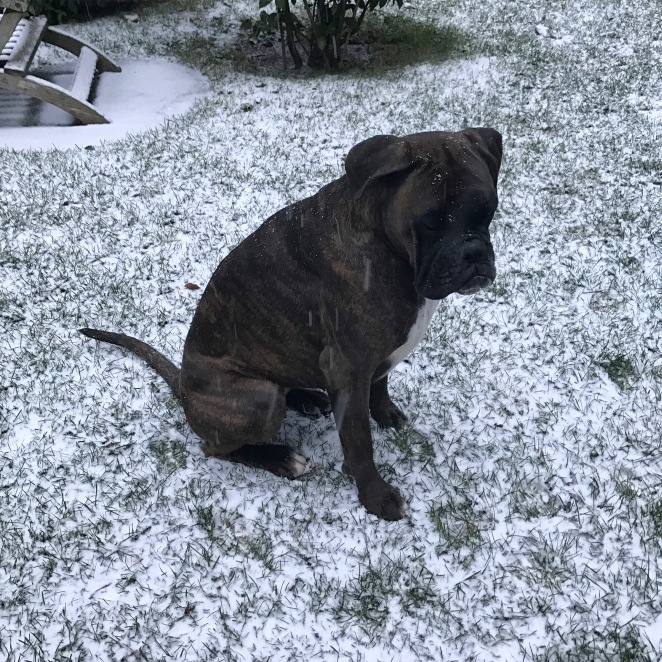 I hate snow!! It’s wet, it’s cold, and I HATE it!!! Apparently this troubles Veronica ALOT!! She keeps on telling everyone “I don’t understand?? What’s wrong with Felicia, all other dogs love snow!”

I don’t care about “all other dogs”…I am sure little Ms perfect Lego loved it..

I overheard Veronica talk to Dennis about me and my so called “snow problem”.. I heard words like “Ridiculous”…”unheard of”…”Let’s take her to the mountains”…

Apparently they can!! They forced me out of the car!!! And we climbed up a small hill into a  white desert of cold!

First I did not move, hoping for some miracle! The snow might, by magic, just disappear! Yes, miracles happen! You hear about them all the time, well that’s what I’ve been told. 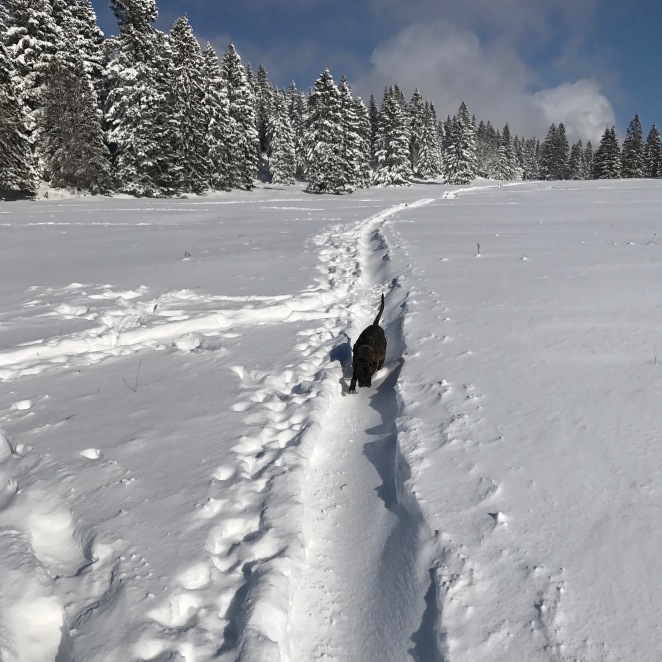 As it happens, no miracle here!!

“Felicia, let’s have fun in the snow”.

Begrudgingly I started to explore, yes, I’m no wimp! I ran back and forth on the path. Feeling very proud of myself.

In Veronica’s book that doesn’t count as “Having fun in the snow”. She threw a great treat into the deep area! Isn’t that just so inconsiderate?

“C’mon Felicia, go and find it” 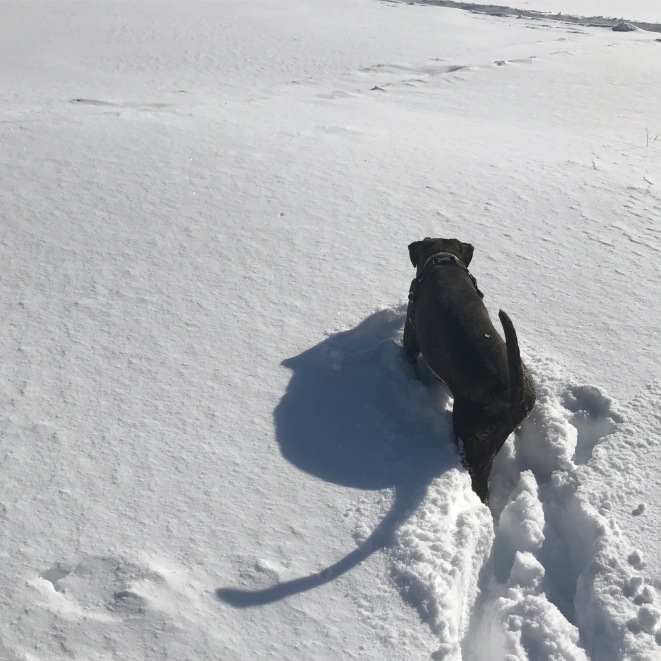 I was torn… should I…or not? Bravery (and hunger) made me struggle into the depth of the unknown.

See how courageous I am? No wimp! I’m a real little daredevil! 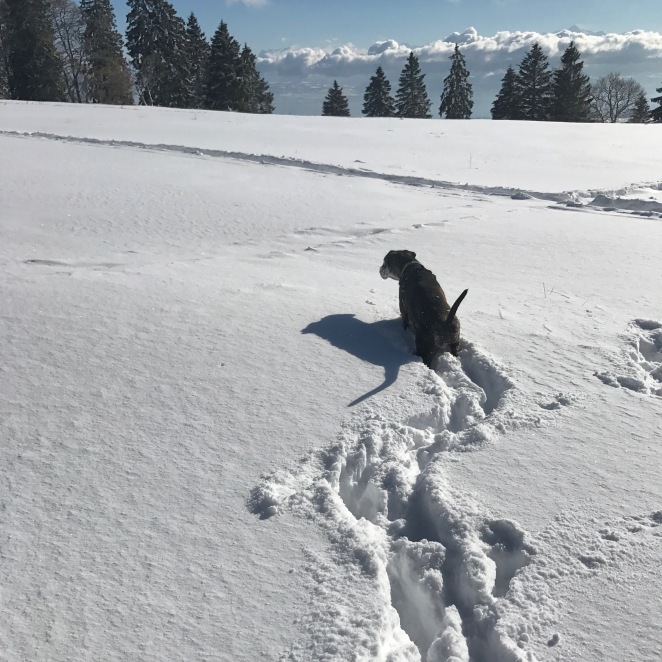 Sadly the goodie was no where to be found, even with my amazing nose. (Yes, that’s actually my strength) I went quite far.. until I decided…

…I wasn’t that hungry after all. 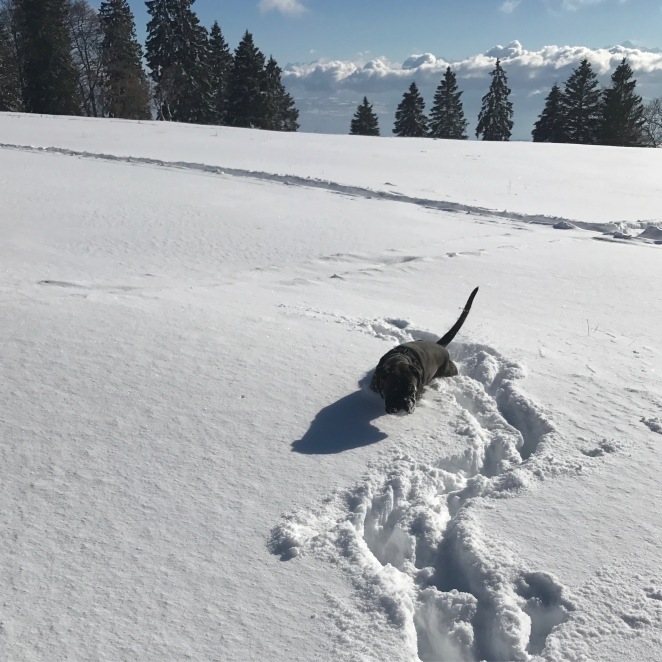 Coming back was quite an ordeal. Have you tried going through deep snow? I’ve got news for you: It’s not as easy as it’s looks. (And very uncomfortable) 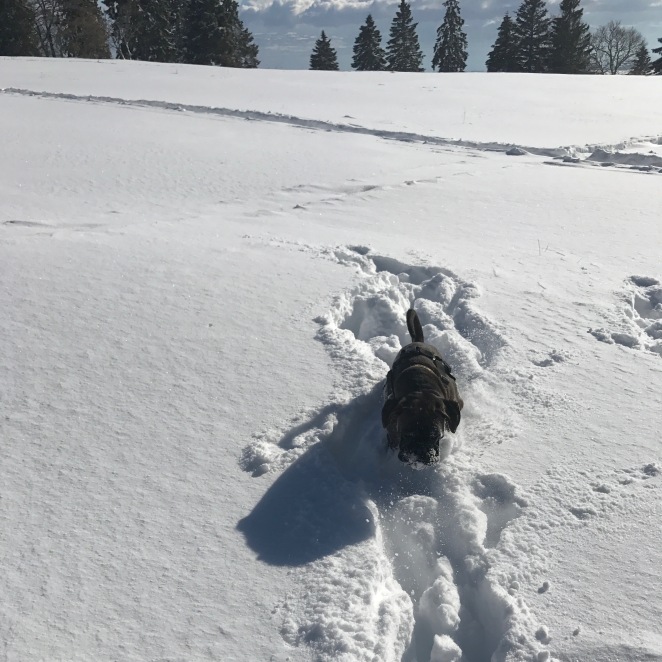 But as I’m a bold and strong  Boxer girl, I made it back safe!

I felt Veronica owed me loads of rewards after such a difficult expedition.!

She seemed a little disappointed. “Felicia, go and run in the snow, it’s fun” Fun??  Fighting my way through the deep and cold doesn’t qualify as fun to me! 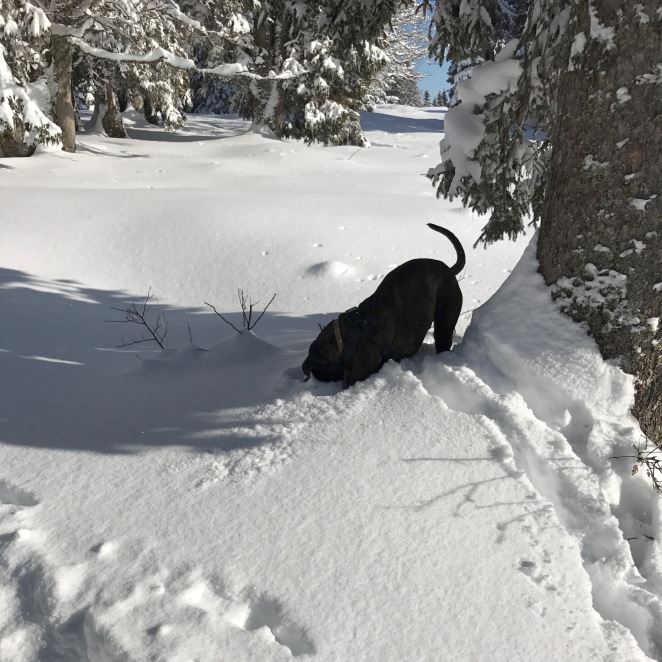 I did try, look, I’m even digging! Not that it made any sense, I thought I’ll give it a shot. Just in case there might be something interesting hidden.

Obviously there was nothing! (Only consequence was a cold and wet nose!!)

After many attempts to “have fun in deep snow”. (Well one or two) I decided I prefer running on the paths.

Not that I’m scared, (or a wimp). I just feel I’m more suited for that kind of activity. And I have short legs, everyone knows that. And I needed to stretch my legs. Nothing wrong here. 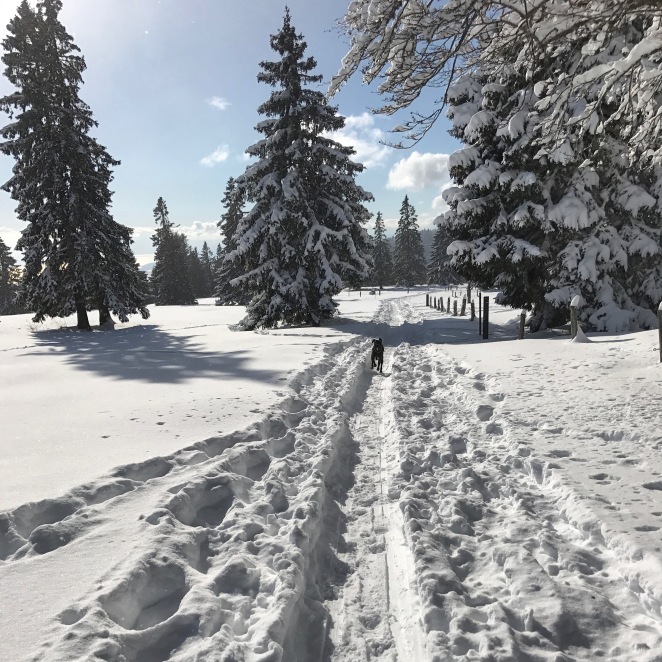 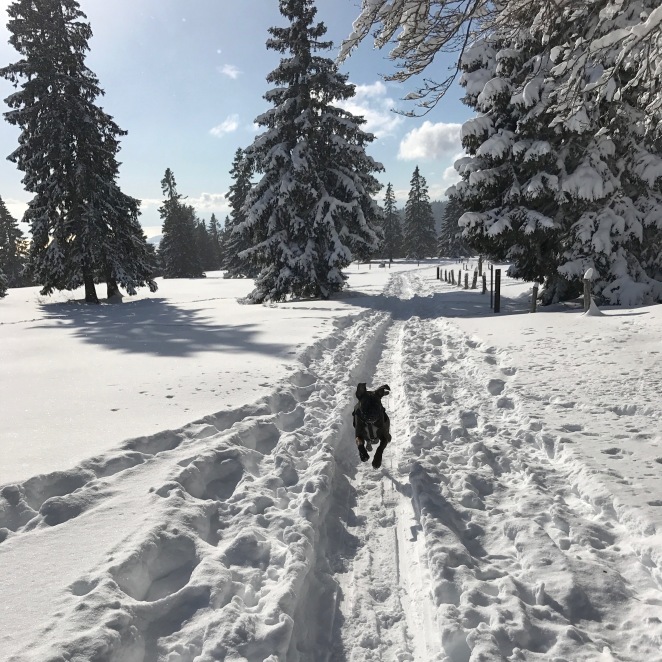 I had the best of times running back and forth on the path. This was the perfect opportunity to train my running skills so I can beat and impress Indya! Run and run! 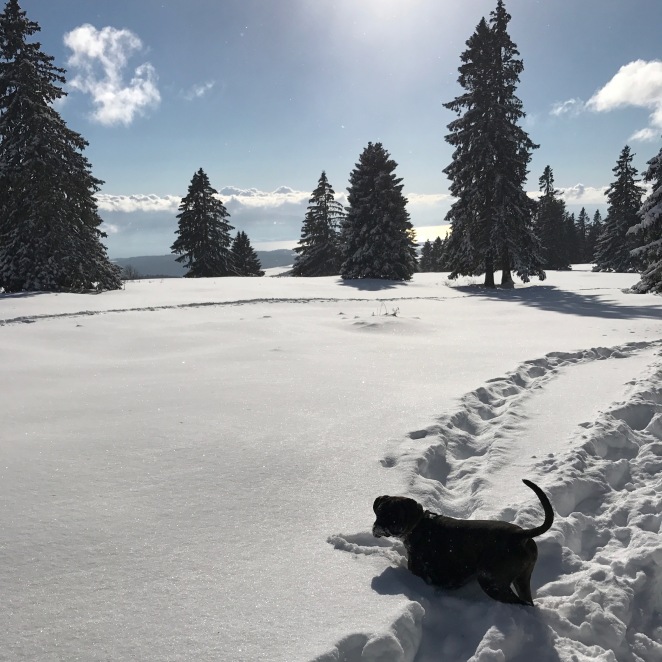 Veronica, who doesn’t take no for an answer, continued to lure me away from the path..

No way I’m tricked in there again! Oh no!! (I’d rather go hungry than wet!)

Veronica, annoyed, told Dennis  “What’s the matter with her. All the dogs I know love to play in the snow”.

Enough already with the “snow dog lovers”! Whats her problem? She can go in herself and “have fun”!

And I don’t see why anyone in their right mind would prefer to struggle through that stuff when there’s a path.

I DON’T CARE ABOUT “ALL OTHER DOGS”

(Dennis didn’t seem worried at all. He’s from California! He get’s me. He’s cool!)

Time to go home. I felt tired and happy! I had shown Veronica I’m perfectly capable of having lot’s of  fun in the snow…my way!

Snow? Well it’s great, yes, fun! What’s not to like…apart from the cold…and  wet…and the deep areas…  Snow? I love it!