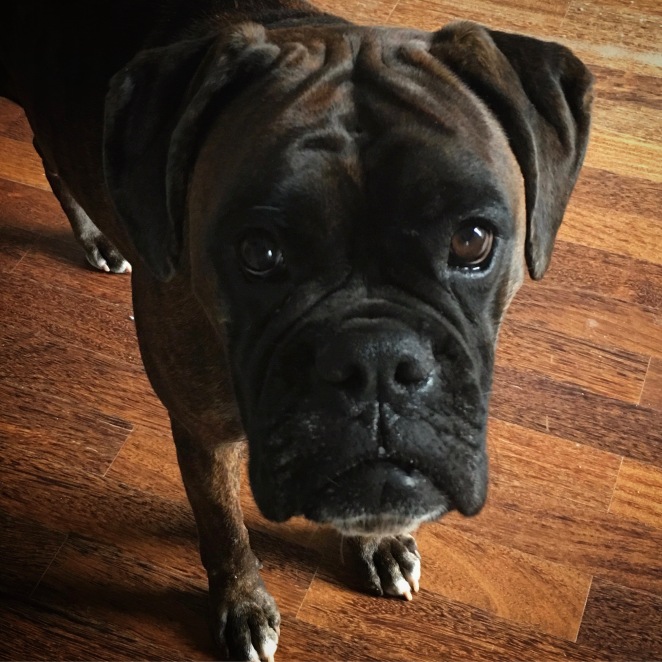 Today is  my lucky day! MC took the day off and is spending it with Veronica so this means: I GET A PLAYDATE WITH INDYA!! YEAHHHH!

I am so impatient!  Can’t she hurry.. .  She is so slow, I follow her all over the house imploring her to get ready fast!  We are starting the day with a walk. Perfect, I hope Indya knows all about “Rabbits”, I really need to know.

Finally everyone is ready! 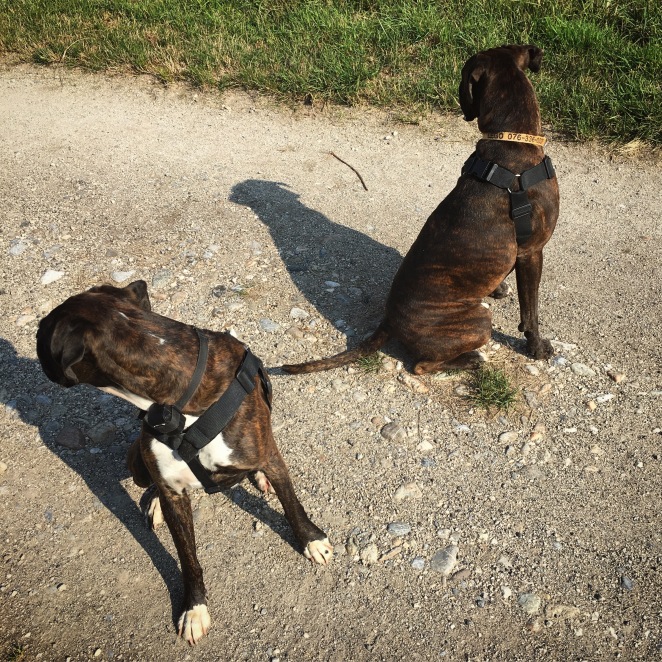 We meet up at our usual walking spot. Indya has the same gear I have, apart from the Lego collar, obviously (!!). We wait for the “GO” signal, very very difficult to sit still, so much to check out.

Better get the whole picture before taking off. 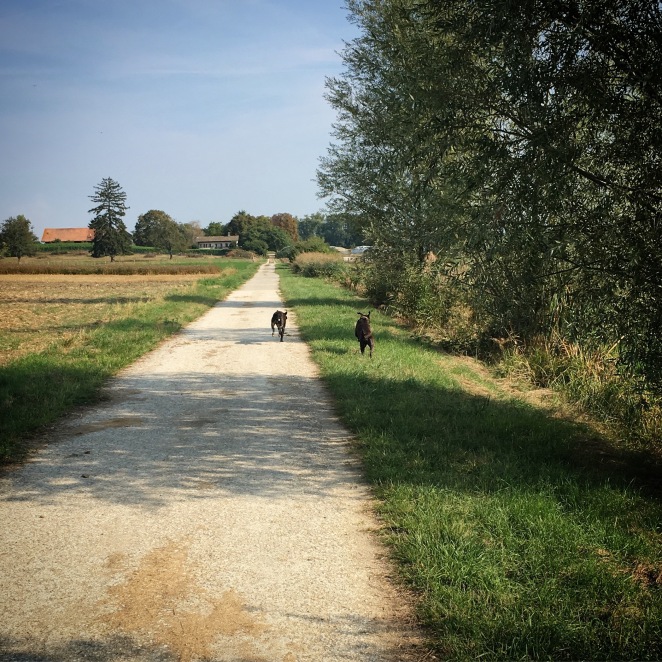 We run like crazy! There is one  small matter:  I’m a little embarrassed to admit this…Indya is faster then me, yes, I know, how come??  Not only is she fast, but she NEVER gets tired, I don’t get it. 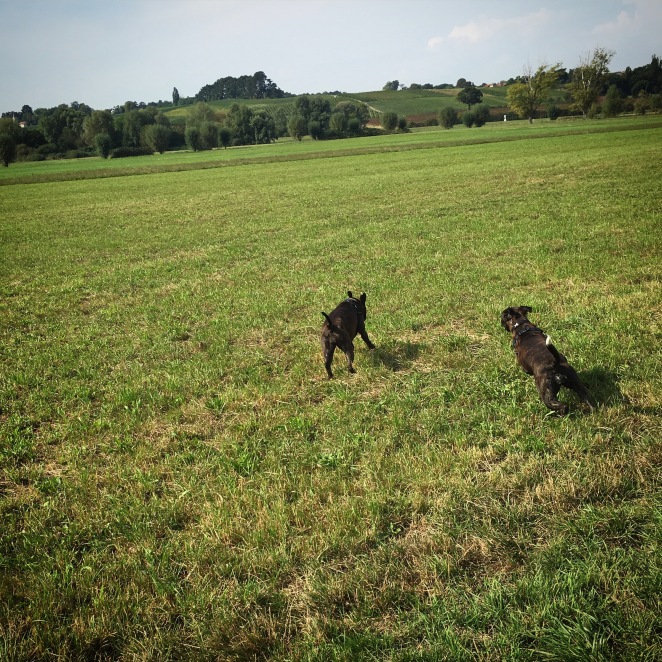 She runs and runs and runs, I try to cut off, to come ahead. One minute later there she is in front of me, again.  I was starting to feel a little tired. I cannot tell Indya this, I don’t want her to think I’m some kind of wimp, a loser…

A major disappointment; Indya is NOT interested in chasing birds, yeah can you believe that?? Not at all, she ignores them! I tried to tell her how cool and fun it is. No she DOES NOT CARE!

And she knows NOTHING about “Rabbits”… pffff 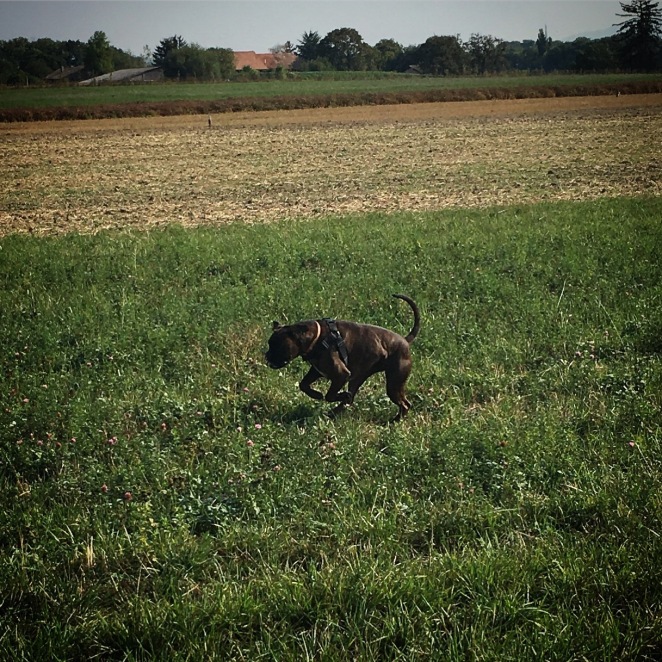 I went for a  solo “run and bird chase”, just to show her, did she even look at me ? NO not even a glance.

When I tried to persuade her, she gave me the “you’re so childish” look, the “I’m way above bird chasing ” look. Just because she is 6 months older does not give her the right to behave all “old sisterly”. 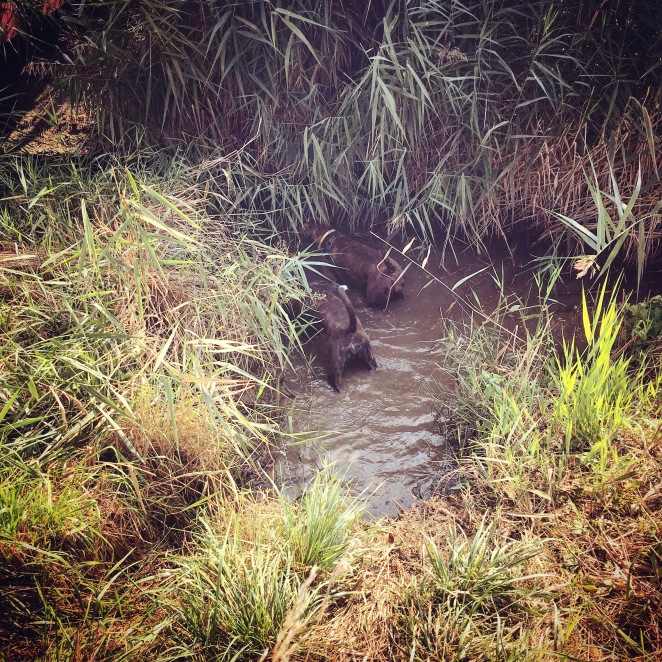 We do agree on the “swim in muddy water fun”. As expected she showed no interest in the jumping green beasts, (Veronica told me they’re called frogs, silly name).

I tried a little unsuccessful frog  chase. (I was hoping to impress Indya).

MC was not  happy with the muddy water, “Now the car will get all dirty”. I think it has something to do with VH. I have noticed the car is mostly clean these days.

Indya told me there has been a few changes in her life since he moved in with them,  for one the house has grown. She doesn’t understand how, but there is more space.  And he takes her running all the time, you see that’s why she’s so fit!!

Perhaps I should get Veronica or Dennis to take up jogging ? Ha ha, just a joke, will never happen! 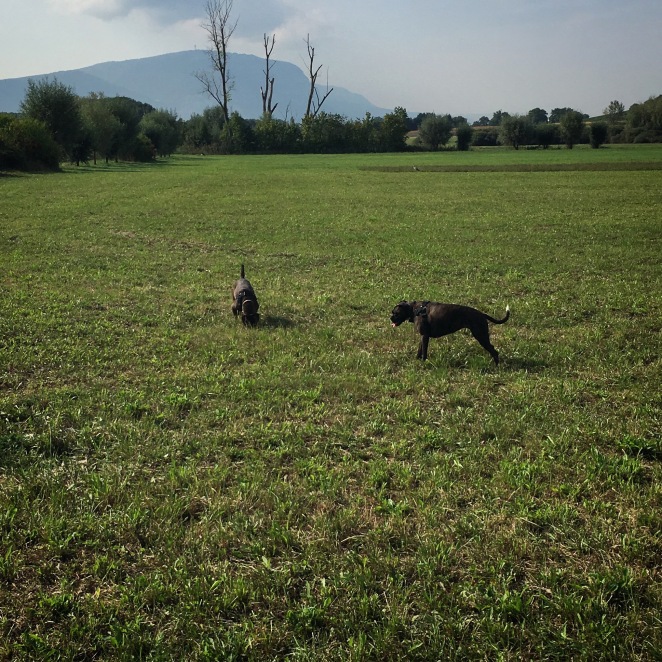 As I got pretty exhausted,  and  found a very interesting hole to investigate, I stopped. Indya called me a quitter, I’m NOT.  I go my  own rhythm … there’s no need to hurry,  smelly grounds need exploring. She just doesn’t understand.

Clearly we have different priorities on our walks: 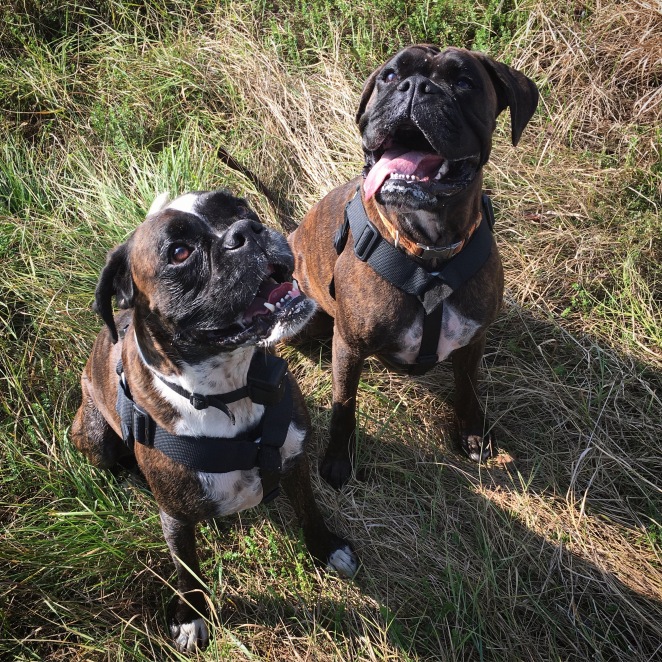 Ok so yes I might look a tad more tired here, but common, nobody in their right mind runs like her. Perhaps she’s trying to become a boxer champion runner? Or break a record?  Actually, I think it’s because she adores VH.

I am more of a sprinter, short distance one. I have great muscles, I’m  the body builder type. Yes,  even Dr L says so!! (I’ll tell you all about him some day, he’s the best, Indya agrees with me).

We got loads of treats, yummy meatballs… I hardly ever get those, (Veronica thinks they’re too smelly) only on special occasions… So unfair! 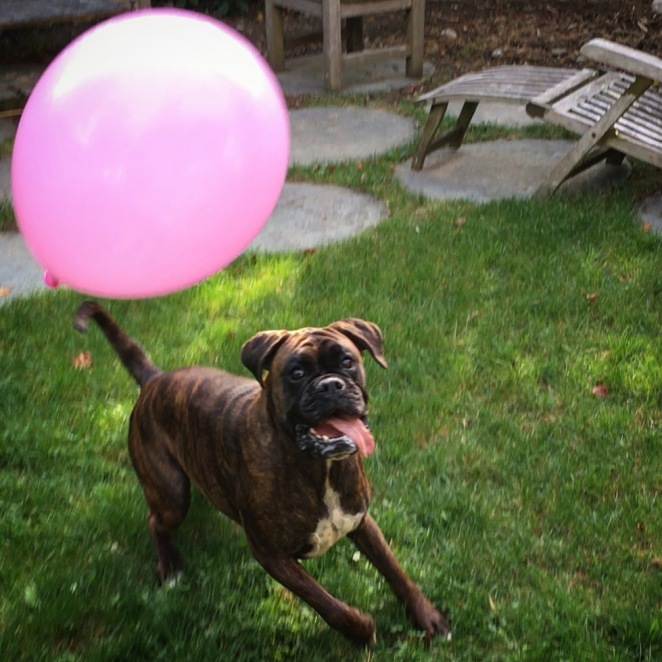 Back at the house , after a short rest, it was time for “chase and push the balloon” one of my absolute favourite games!! 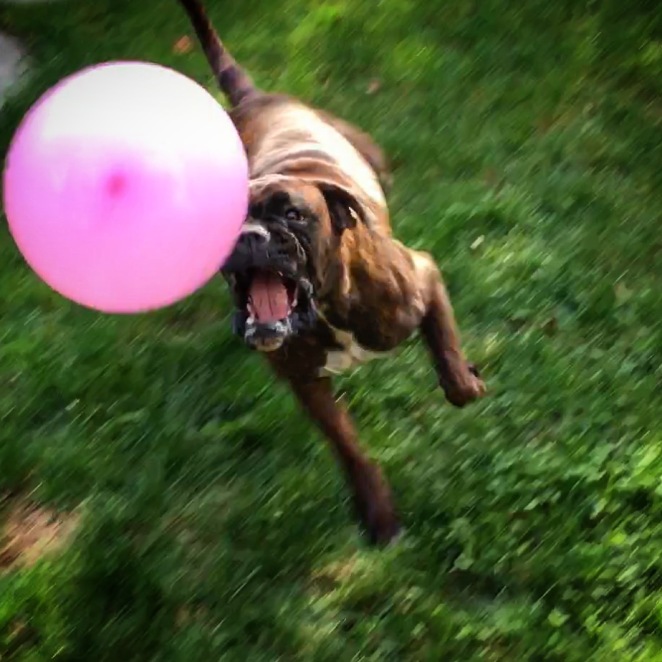 NC and EC taught me to play, now I’m a champion!! 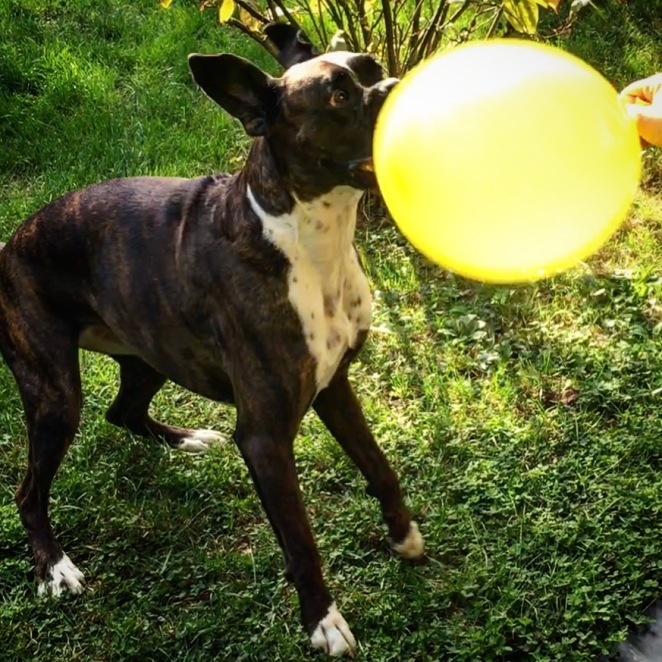 Indya is not so comfortable with the game, I don’t think she likes the explosions. She played a safer version; MC holding the balloon. 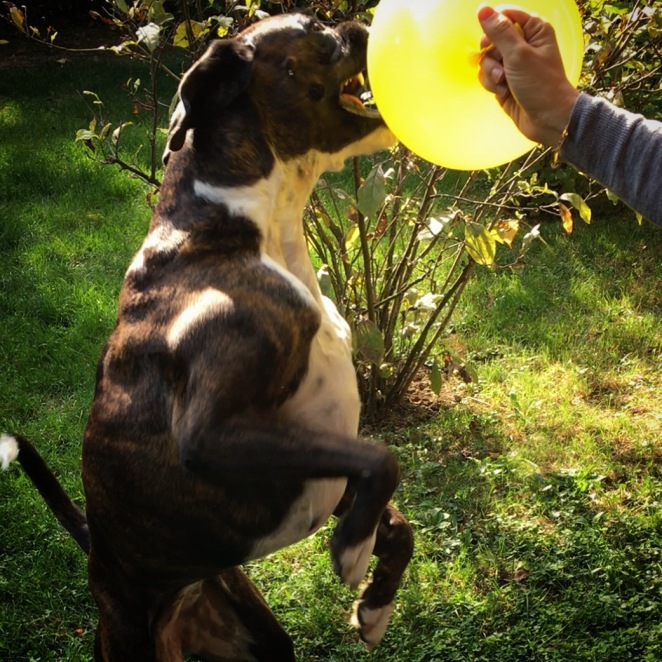 We had so much fun! Veronica filmed us and gave us more and more balloons, well Indya only played with the yellow one, it never broke. 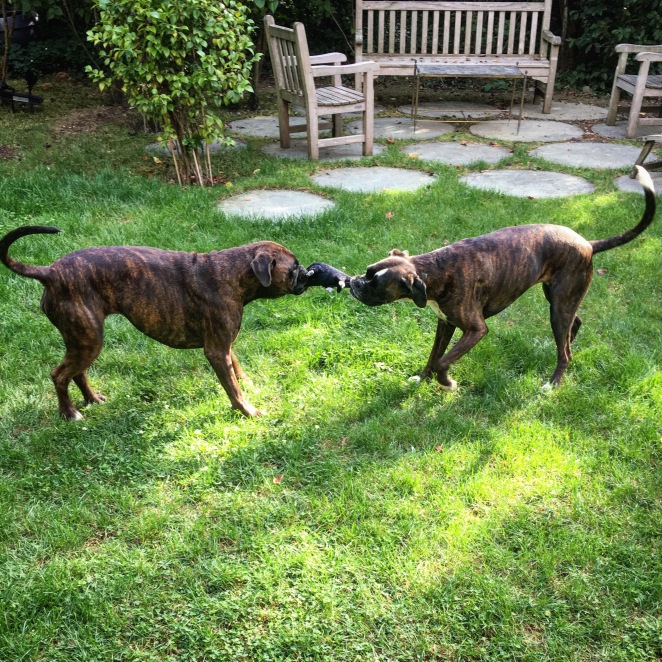 After the balloon game we played Tug of war. Never gets boring. 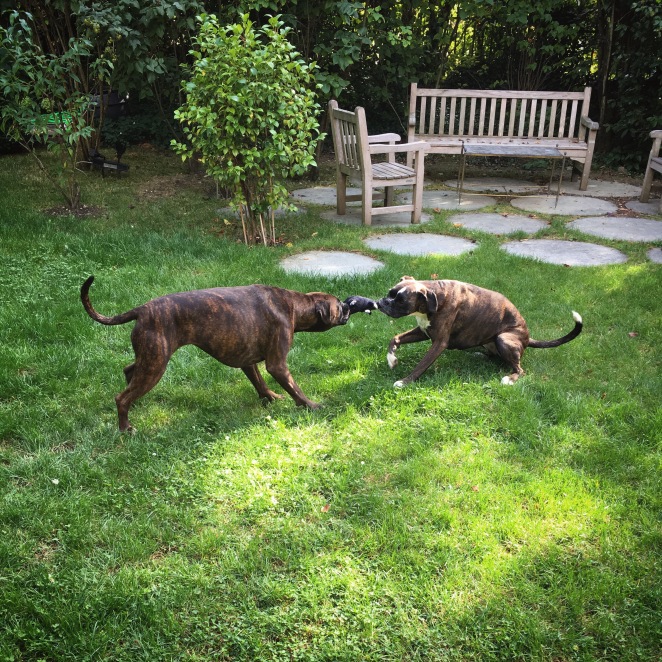 Same story over and over again.

I’M MUCH STRONGER!! How is this possible??? I think she does magic, only explanation! 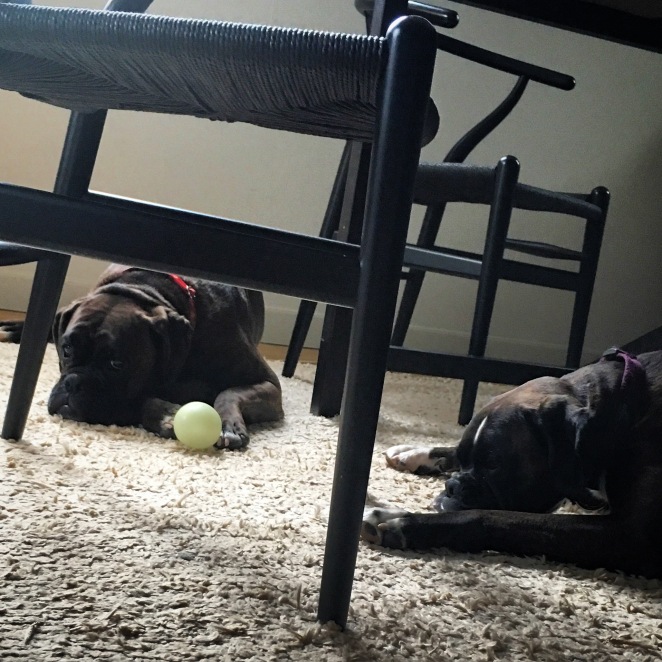 By the end of the day we were wiped out!! Yes even Indya.  One fun fact, I got the little ball… ha! 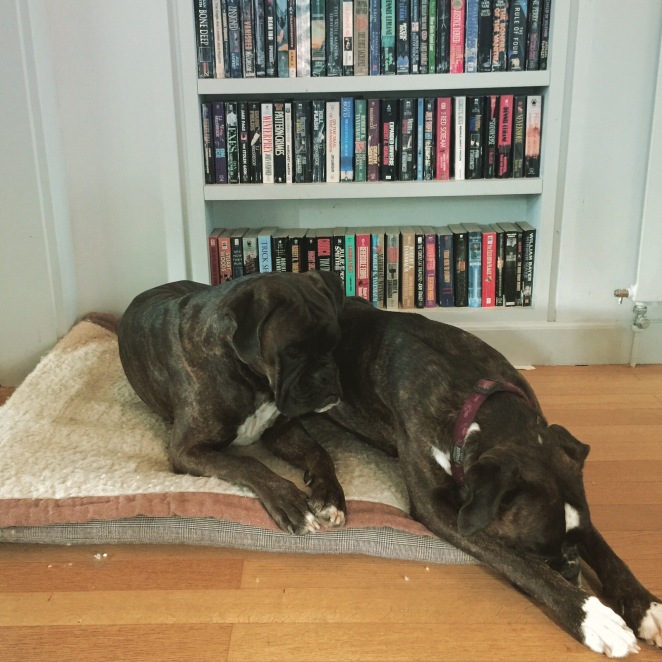 Indya is the fastest runner ever, she does not chase birds, or smell the ground, or dig holes ( apart from in the garden but that’s a whole other story and another game) she does not even want to find out about “rabbits”…

… nothing matters, she is my BFF, we have so much fun and I love her!

(I will continue to inquire about “rabbits”,  my hopes lies with Inook!)

Who are the main characters in this episode?  Find out on  previous posts: